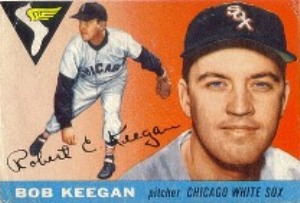 Nominated by: TJ Valacak
Why did TJ Valacak nominate Bob Keegan for the HOM?

I was playing around on ebay and I put a search in for Bob Keegan - former pitcher for the Chicago White Sox. His claim to fame is a no-hitter he threw as a member of the Sox in 1957. 1957 coincided with my fathers move from Benton Harbor, Michigan to the Windy City. He spent much of his free time those first few years at Comiskey Park. And in 1957, he was lucky enough to witness Bob Keegan's no hitter. (I know for myself, as I fan, I am always hoping to see one everytime I go to the ballpark. Even allowing myself to get excited if we get to the fourth inning and there is still a no-hitter.) Baseball has always been a huge bond between my dad and I. We have attended and watched hundreds of games together. It was only a few years ago that he told me he had been at the Keegan no-hitter. I soak up any story he tells me about games attended in the 50's and 60's, a no-hitter? I was floored. Since then, I have been able to pick up a few oddball Keegan items, just scorecards, but nice little items. My latest ebay pickup was a postcard of Keegan put out in the 50's. That oddball item has spurred me to make this official, and nominate Keegan as my HOMer.