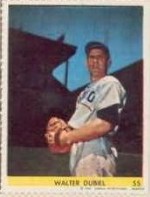 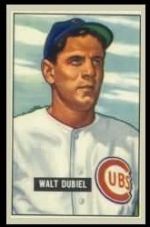 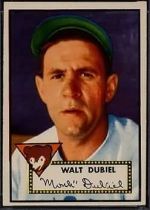 Alert reader, Lyn Shepard of Switzerland of all places, brings to my attention the impeccable credentials of Walt “Monk” Dubiel who played for the Cubs among others from 1944 to 1952. Although he had a 1952 Topps card he only pitched 2/3 of one inning that year. I’ll forward his card, and a colorless variation thereof. Hopefully you’ll see fit to add him to the Hall. His credentials given to me are:

He was Walt 'Monk' Dubiel, a pitcher you may remember from the Frankie Frisch years, whose obituary in October of 1969 explained his HOM credentials eloquently.

'Although Dubiel had the equipment to be a topflight hurler,' the obit explained, 'he never seemed to reeach his true level. He was hampered by a hip injury, an ear infection, and a recurring back ailment. He was deferred from military service during World War II because of an eye ailment. And, as if he didn't have enough problems, he and his wife were in an automobile accident, although neither was injured seriously.

'During his career with the Yankees (1944-45), the Phillies (1948), and the Cubs 1949 through 1951), he won only 45 and lost 53. Until the last few seasons of his career he was an excellent control pitcher. [But] a streak of wildness in 1950, while he was with the Cubs, led to an explosive incident that embarrassed Dubiel and put Manager Frankie Frisch on the hot seat.' And this incident alone, I think, should enshrine him in the HOM.

'The Cubs had been on a losing streak,' the obit continues, 'and late in July they were in Philadelphia for a series. Dubiel started a game and was sailing along with a 4-0 lead through six innings. But, in the seventh, he developed wildness and dished out two hits and six passes. Frisch, steaming on the bench, refused to remove him as the Phillies fans shouted their disapproval.

'In an almost hysterical outburst after the game, Frisch told writers he would have kept Dubiel in the game ^'even if he gave up 99 runs.' Frisch accused Dubiel of 'looking over his shoulder, toward the bullpen, waiting for help.'

''I'm sick of watching some of my pitchers getting into jams and then peeping at the bullpen, pleading for help. I would have taken Dubiel out if the Phillies were even getting load foul balls. But not the way he was going.'

'Dubiel, also unhappy with the humiliation and the subsequent 6-4 defeat, said he had been hit in the shoulder in the first inning by a Granny Hamner drive, and the shoulder stiffened as the game progressed. 'There was a big welt on my shoulder,' Dubiel said.

'The righthander had the Phillies fans in his corner when the Cubs came to bat and Frisch took his position in the third-base coaching box. They tossed cushions and other debris onto the field in protest of Frisch's tactics. Writers also blasted Frisch.'

I recall reading an AP report on that game in the Detroit Free Press at the time, and it pointed out that Dubiel actually walked all six Phillies in a row, thus setting a major league record that surely still stands.

In any case, I never forgot the incident, and my instinct tells me Dubiel richly deserves HOM recognition for the dubious honor. I hope you agree and can pursue his nomination.