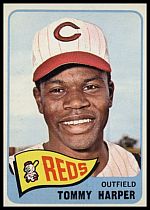 I met Mr. Harper at a card show in Mansfield Massachusetts in the spring of 2014. The card dealer asked him to come over to his table as he was entering the hall. Mr. Harper was very personable, engaging in sports conversation and other random topics. He was physically fit and we remarked about he could still steal a base at the age of 74. He periodically returned to Seattle for baseball card signing and his signature is highly sought. From a person who does not meet many MLB players Mr. Harper has emerged as my HOM for OBC.