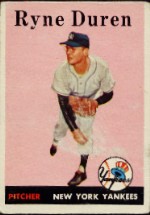 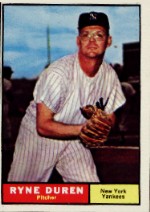 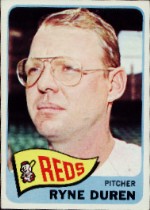 Ryne was the coke-bottle-glasses wearing reliever who is best remembered for his time with the Yankees, from 1958 - 1961. Made fun of because of his glasses, and supposed lousy vision, Duren used this to his advantage during warmups when he would uncork a 95 mph fastball over the catchers head and into the screen, making a frightful loud noise and giving the batters the impression that he had no idea where the ball was going. He was the best reliever in baseball for a couple of years (saved 20 games in '58 -- a lot for back then), but then it all fell apart, and he was then traded around the majors. His lifetime record is 27 wins, 44 losses, and 57 saves. He did strike out 630 men in 589 innings though, and was known for being one of the fastest pitchers in the game. For much of his career, Ryne was a serious alcoholic, but he eventually went to therapy and recovered and is now a substance abuse counsellor. Ryne was the namesake of future hall of famer Ryne Sandberg, and shares my birthday of February 22. An interesting character and a great guy, with no chance of ever making the real hall.