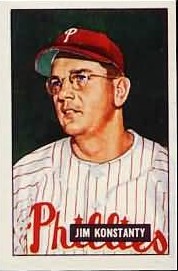 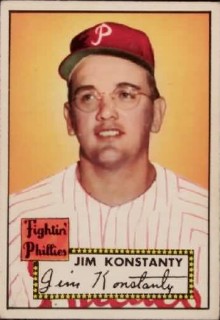 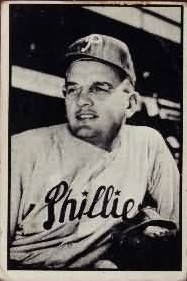 Nominated by: Peter Mead
Why did Peter Mead nominate Jim Konstanty for the HOM?

As a kid you could only dream of having a dream season in the big leagues. There are a handful of MVP winners who had that single dream season: Bobby Schantz for the 52 A's, Frank McCormick for the 1940 Cincinnati Reds, Zoilo Versalles for the 65 Twins and my HOM nominee Jim Konstanty of the 1950 Philadelphia Phillies Whiz Kids.

Why Konstanty? In the forties, Big Jim was my Dad's phys. ed. teacher and in my Dad's words a bit of a harsh taskmaster (I suppose some of the whiz kids would say the same thing about the team's old man). He would teach until spring training started. During the short time they lived in my home town the Konstantys became very close friends with my grandparents--even leaving their kids with my grandparents when they traveled south for spring training.

Uncle Jim had his magical year in 1950. The National league MVP--going 16-7 appearing in 74 games as a relief pitcher. Eddie Sawyer made him a surprise starter in game one of the series and he lost a heartbreaker 1-0. After 1950 Uncle Jim never experienced the same level of success as he spent a few more years with the Phillies, Yankees and Cardinals. He would routinely leave Yankee tickets for my Aunt while she was going to school in NY (I can only imagine free tickets to see the mid-50s Yanks).

Uncle Jim retired to run his sporting goods store in Oneonta and in the late fifties he traded in a life insurance policy to buy a small fishing cottage on Lake Otsego about five miles north of Cooperstown.

In the mid-sixties I got to know my Uncle Jim and Aunt Mary with several summer trips to the cottage on Lake Otsego. Uncle Jim would take us into Cooperstown and on to Abner Doubleday Field where he taught my two older brothers and me not only how to play the game, but also to truly appreciate the game (to this day I will go to any game anywhere--and just about anytime). We would then head over to the Hall of Fame where the director was a friend and my entire family would get in free.

Baseball and his MVP trophy were really larger than life for a six or seven year old boy. I can date some of the vacation trips because Uncle Jim would take us down to his sporting goods store--and on one of those trips he gave us a box of 1965 high numbers (I don't know why we didn't go back to the store in 66 or 67). My first Dormand postcard is a personalized autographed Konstanty--a short printed card from the 1953-55 set (it also has the obligatory thumbtack holes).

On another one of those summer trips (1966), we left Cooperstown to go on a day trip and ended up at Shea Stadium where Uncle Jim was pitching in an old timer's game. I still have the menu from the Shea Stadium Grill Room with 'to Chris, Best wishes Phil Rizzuto,' to Pat, good luck Phil Rizzuto,' to Peter, all the best Phil Rizzuto.' (Chris and Pat are my brothers). There is also a signature To Jerry from Casey Stengal--I am still wondering who Jerry was. What I do remember is a steady stream of old ball players, with names I recognized, coming over to our table.

My Uncle Jim died relatively young in the mid-70s. But I should say that over the years, I still stop at the cottage on Otsego Lake to visit my Aunt Mary and show my kids where I spent a little bit of my idyllic youth. I also visit for the baseball stories and to hear tales of my grandparents from a completely different perspective. She also still insists on paying my way into the Hall of Fame. On my last visit she retold a story on how the Boston Braves cut my Uncle Jim to keep a young lefthander. Of course, this was the late forties and the southpaw was Warren Spahn.

So enough said (and lord knows I don't want to compete with Morganti and Rittenberg for lengthy rambles)--Casimir James Konstanty is my HOM nominee.