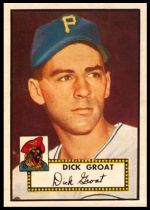 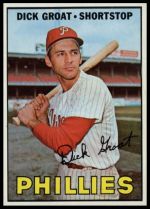 When I first started collecting as a kid, Dick Groat was the first 'old' card I ever got. So I started collecting his cards (as a kid I never got the 1952 card - but did as an adult) one of every year and set (still many I don't have actually).

One of the biggest surprises of my life was walking into Cameron indoor Arena and seeing a banner with 'Groat' on it. I ran home and checked my cards, and found out that Dick Groat had been an insanely good basketball player. I had no idea.

I once met him in a game in Cameron, and he's still alive today.