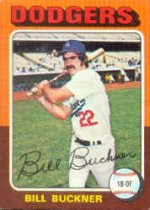 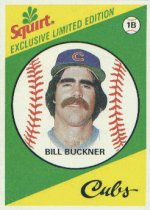 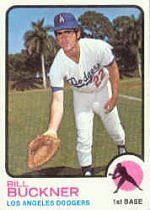 Nominated by: Pat Sweeney
Why did Pat Sweeney nominate Bill Buckner for the HOM?

Bill Buckner will forever be remembered for the Mookie Wilson ground ball that went through his legs in the sixth game of the 1986 World Series and cost Boston the championship, but he should be remembered as an outstanding hitter and fielder who overcame serious injuries. A consistent outfielder with the Dodgers (1969-76), he went with Ivan DeJesus to the Cubs for Rick Monday. Shifting to first base, Buckner hit .300 with Chicago (1977-84), won the 1980 batting title and twice led the league in doubles (1981 and '83). Playing on gimpy ankles, Buckner had outstanding seasons at Boston in 1985 and 1986 after coming over for Dennis Eckersley. He tied a major league record by playing 162 games at first base in 1985 and broke the ML record he set in 1983 for assists at the position with 184. Entering the 1990 season, he led all active players with 2,707 career hits.

June 6th, 1968: Tim Foli is the top choice in the regular phase of the free-agent draft. The A's take Pete Broberg with the second pick, but he opts to attend Dartmouth instead. Cecil Cooper lasts until the 27th round. The big winners are the Dodgers, who, in the January draft and the regular and secondary June drafts, select 15 players who end up in the ML. Among them: Davey Lopes, Geoff Zahn, Bill Buckner, Joe Ferguson, Tom Paciorek, Bobby Valentine, Steve Garvey, and Ron Cey.

January 11th, 1977: In a 5-player swap, the Cubs send OF Rick Monday to the Dodgers for 1B-OF Bill Buckner and SS Ivan DeJesus.

May 17th, 1979: The wind is really blowing out at Wrigley as the Cubs (6) and the Phillies (5) combine for a ML- record-tying 11 HRs during a wild 10-inning slugfest won 23-22 by the Phils. Dave Kingman has three HRs and six RBI for the Cubs. Teammate Bill Buckner has a grand slam and seven RBI. Mike Schmidt's two HRs include the game-winner in the 10th.

July 31st, 1982: Phillies 2B Manny Trillo misplays Bill Buckner's grounder in the seventh inning of a 2-0 win over the Cubs, ending his errorless string at 89 games and 479 consecutive chances. He falls two games short of Joe Morgan's record 91-game streak, and his 479 straight chances set a major-league record.

May 25th, 1984: The Red Sox trade P Dennis Eckersley and minor leaguer Mike Brumley to the Cubs for veteran Bill Buckner, who had been benched in Chicago in favor of Leon Durham but will immediately become Boston's starting 1B.

August 7th, 1984: Bill Buckner and Tony Armas each hit grand slams off Tigers ace Jack Morris to spark the Red Sox to a 12-7 victory in the first game of a doubleheader split.

October 25th, 1986: Trailing 5-3 with 2 out and no one on base in the bottom of the 10th inning, New York rallies to win game 6 of the World Series 6-5 and force a deciding 7th game. After Gary Carter, Kevin Mitchell, and Ray Knight single, Bob Stanley uncorks a wild pitch that permits the tying run to score, and a hobbled Bill Buckner lets Mookie Wilson's slow bouncer skip through his legs, allowing Knight to score the winning run.

April 25th, 1990: At Fenway, gimpy-legged Bill Buckner, 41, hoofs out an inside-the-park home run for the Red Sox. It will be his only homer in this, his last, season.

August 4th, 1992: An unidentified buyer purchases a toothpick once used by Mets Hall of Fame P Tom Seaver at a memorabilia auction in New York for $400. At the same auction, actor Charlie Sheen pays $85,000 for the ball hit by Mookie Wilson which went through Bill Buckner's legs to end Game Six of the 1986 WS.