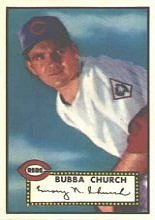 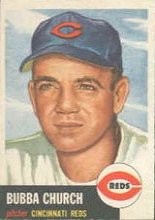 Emory Nicholas 'Bubba' Church. This guy deserves to admitted based on his name alone, but I think I can make a compelling case for him nevertheless. During his six years in the Majors, Bubba pitched for 3 different National League teams: Cubs, Phillies and Reds. If he had managed to eek out just one more victory, or if he had managed to avoid just one defeat, he would have finished with a perfect -- and I do mean perfectly mediocre -- winning percentage of .500. As it stands, his career record is 36-37 and that's pretty darn good enough for me excuse the language. Bubba didn't just pitch, though; he was a multi-faceted player. He could hit (had 53 of them), he could hit for power (3 home runs!) and he could field (one year he made no errors!). I'm not sure if he could run, but we all know speed is overrated in this game, it's those home runs that really count.

Bubba Church never played for a team that won it all but he did have a brush with greatness. He was a member of the 1950 Phillies, the Whiz Kids, who won the pennant with great excitement that year. They lost the World Series in 4 straight, but that isn't really imporant because everyone knows that getting to the World Series is all that matters and I don't just say that because I'm a Red Sox fan. With Robin Roberts as a teammate, Bubba didn't get much attention. But he worked just as hard, did his job and made a contribution to a great team in a great season. Robin Roberts is in the Hall of Fame. Bubba belongs in the Hall of Mediocrity.

At a recent reunion of the 1950 team, Bubba reminisced about that magic season and provided some insight into his character that many current Major Leaguers would be wise (but are unlikely) to consider. Bubba was happy to make $5000 a year for playing baseball, and he thought that the $11 per day meal money 'was the greatest in the world'. He was advised by a friend to buy some stocks with his World Series share, but he needed some stuff for the house so he bought furniture with it instead. Still has some of it too. That's refreshing. That should count for a lot.

Bubba was born in Birmingham, Alabama, and he grew up there. He still lives there. This is, obviously, a man of stability. Since retiring from baseball he has had an assortment of jobs, including selling real estate and running a linen service for doctor's offices. Clearly, this is a man with no fancy-pants, high-falutin, over-inflated airs about himself. He has been inducted into the Alabama Sports Hall of Fame, which is probably the loftiest Hall he is likely to enter. Until now, of course...